I’m not the biggest fan of PX, but when it works, it WORKS, and in the Bushmills 28 Years PX Cask Whiskey… it works. In my mind, thinking of the standard Bushmills Single Malt, I imagined PX just eviscerating it and leaving it a one noted PX bomb. But, spoiler, it didn’t.

It is heavy, it is powerful, but when revealed, I was surprised it was a PX cask. It felt like a restrained finish VS a maturation and that’s super interesting. Now, it could be 2nd or 3rd fill, that info wasn’t released, but the fact remains that this is shockingly not overwhelmed by the PX and ends up being something that… works.

BALANCE, BODY and FEEL
A hair off balance with the sweets hanging heavy, round full body and an oily feel.

Aroma is weird in the way it carries this rum-like funk with that dry-erase note, but the deep, almost musty, sweetness is all PX which is nicely complemented with the nutty, coppery and citrus notes; Palate crosses a touch into the cloying territory and picks up some earthy profiles; Finish doubles down on the darkness.

This is one of the better, heavy PX, whiskeys I’ve had, it’s a touch cloying, but overall quite nice.

This is a heavy, dense whiskey that’s a tad cloying but easily steers clear of being one-noted. There’s a lot going on in this Irish single malt and it essentially puts on a clinic for what the PX profile can be. It would easily sit alongside some of the good PX GlenDronach casks I’ve had.

While I love that they made this Bushmills 28 Years PX Cask Whiskey, and it turned out better than I would have thought, I’m not sure PX is the best fit for Bushmills. I’m missing some of the Bushmills character and I’m not fully finding that Irish essence I love so much. It’s a good whiskey, I’m just having a hard time mentally connecting it as Bushmills.

*Disclosure: The bottle for this Irish Whiskey review was graciously sent to me by the company without obligation. The views, opinions, and tasting notes are 100% my own. 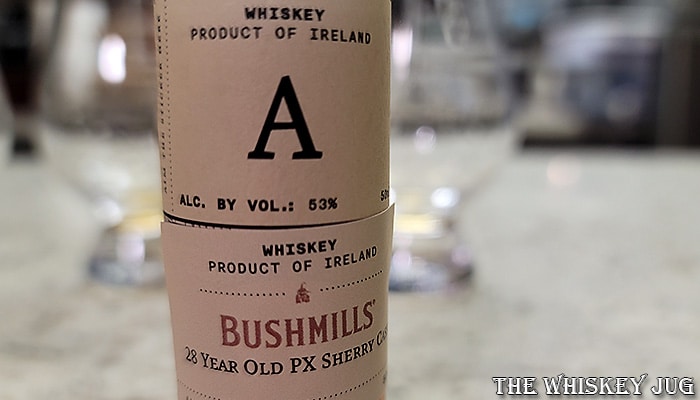 This is a sticky whiskey. It clings to your senses and holds on long after it should have and I alternate between loving and hating it for that. An odd one, but a good one, for sure.